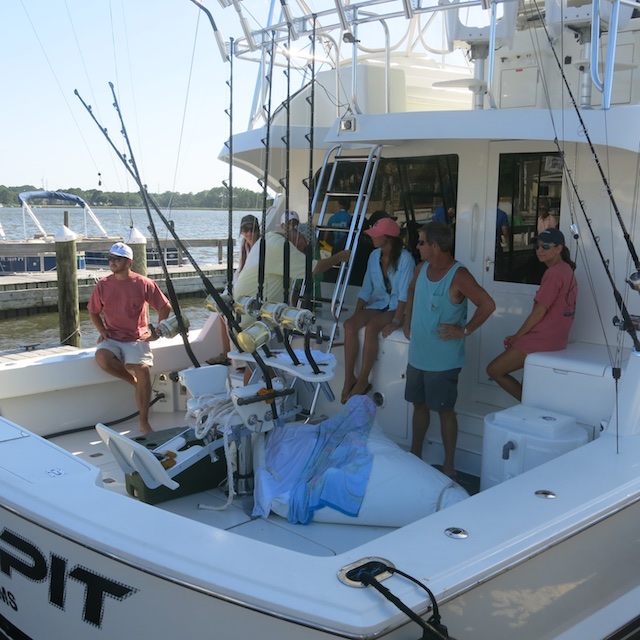 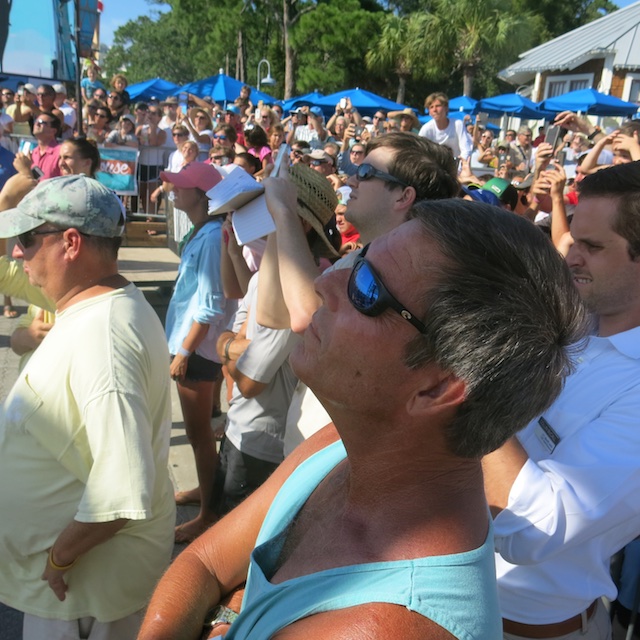 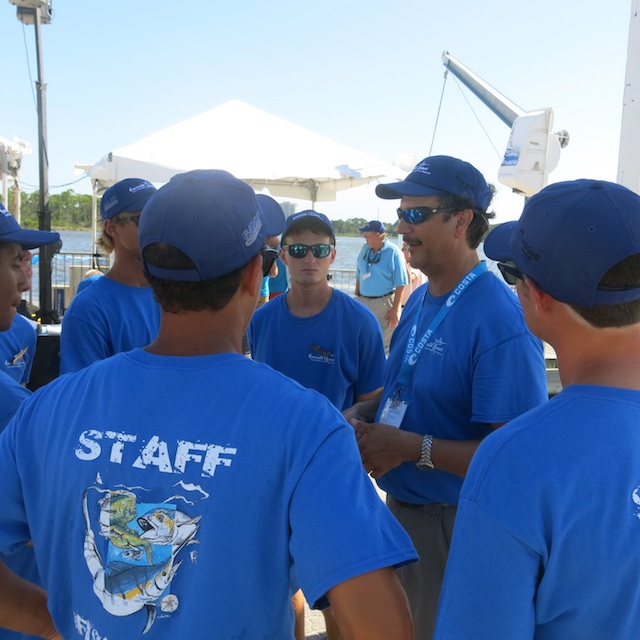 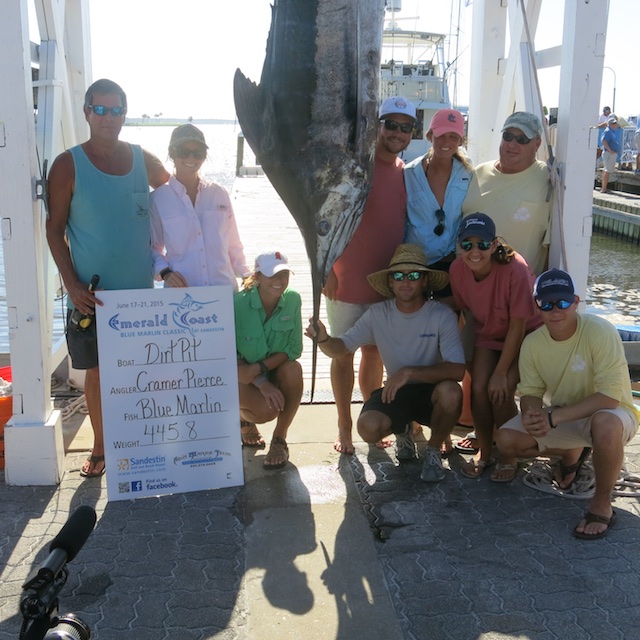 There’s nothing like starting off with a bang! The 2015 Emerald Coast Blue Marlin Classic christened the weigh scales shortly after 4 p.m. Friday as Dirt Pit and owner/angler Cramer Pierce hoisted a blue marlin aloft. The 445.8-pounder was subdued after a brief but hard-fought battle.

“It ran more than others we’ve caught. We really had to back down on it hard,” Pierce explained. The fight only lasted 30 minutes after the fish ate an acrylic pink lure “that’s so old we don’t even know what kind it is anymore.” Dirt Pit, skippered by Capt. Travis Holzborn and based in Orange Beach, Alabama, also weighed in a 114.8-pound yellowfin tuna that also got the large crowd of spectators clapping.

“Conditions were great out there,” Holzborn said. “We had only been fishing about 20 minutes when I saw a nice dolphin. We hooked the marlin right after that.” After weighing the catch, Dirt Pit was heading immediately back out into the Gulf.

But there’s even more to come later this afternoon. Tournament Control received calls from Click Through, Reel Addiction and Cotton Patch reporting boated marlin. Initial measurements on the first two were 110 and 109 inches, respectively, which should put those fish in the neighborhood of Dirt Pit’s. The news that caused a cellular overload, however, was Cotton Patch. Owner/captain Johnny Dorland says their fish taped out at a whooping 134 inches. The exact girth is not yet known. That fight lasted nearly five hours and the fish was boated early Friday evening.

“I’m expecting Cotton Patch’s fish will come in 930 pounds or somewhere close to that range,” says ECBC Weighmaster Jack Teschel. The scale veteran has seen his share of big fish over the last 30-plus years. Teschel has weighed 11 marlin exceeding 800 pounds, including a grander at the Mississippi Gulf Coast Billfish Classic (1,054.6 pounds) and an 889 at the Blue Marlin Grand Championship two years ago.

“Johnny is a good captain who knows how to take care of a fish after it’s on board,” Teschel adds. “He’s got it bagged and iced down good so it won’t lose any weight.” According to Teschel, a fish left out in the hot sun could lose up to 15 pounds of body weight. Iced properly, it might only shave five pounds off the total.

“This is shaping up to be the tightest spread we’ve ever had, with the exception of Cotton Patch, and we’ve still got several hours of fishing left. There are some really top competitors out there and anything can happen. I’m already so excited I’ve had two pots of coffee just to calm down,” he added with a laugh.

The scales at the Baytowne Marina in Sandestin® Golf and Beach Resort open at 4 p.m., with the public invited to watch as the fleet returns. All boats must be under the Mid-Bay Bridge by 8 p.m. to qualify. In addition to blue marlin (weight and catch/release divisions), eligible species include tuna, dolphin and wahoo.

Besides bragging rights, there’s just a little cash incentive for catching the biggest fish. An overall purse of $1.58 million-plus will be split among the top winners. The clock is ticking. And the anticipation builds with every passing minute…