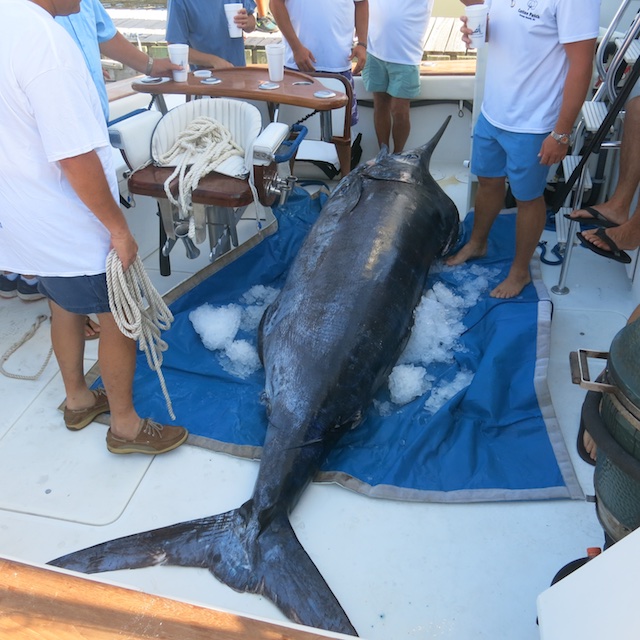 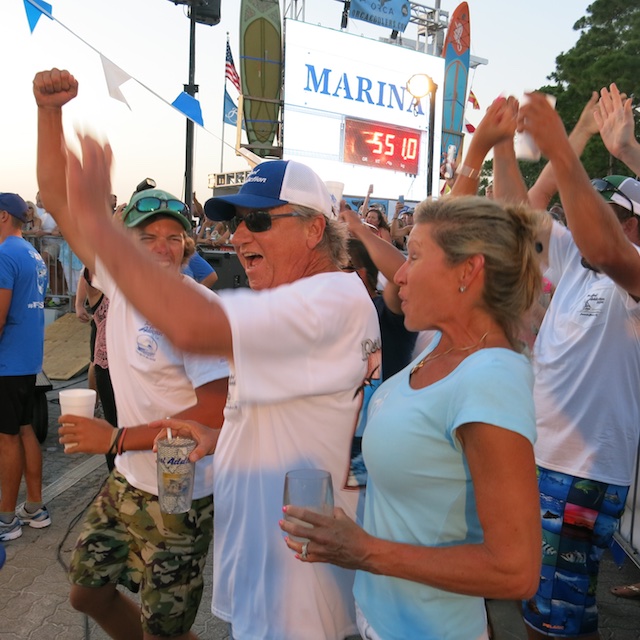 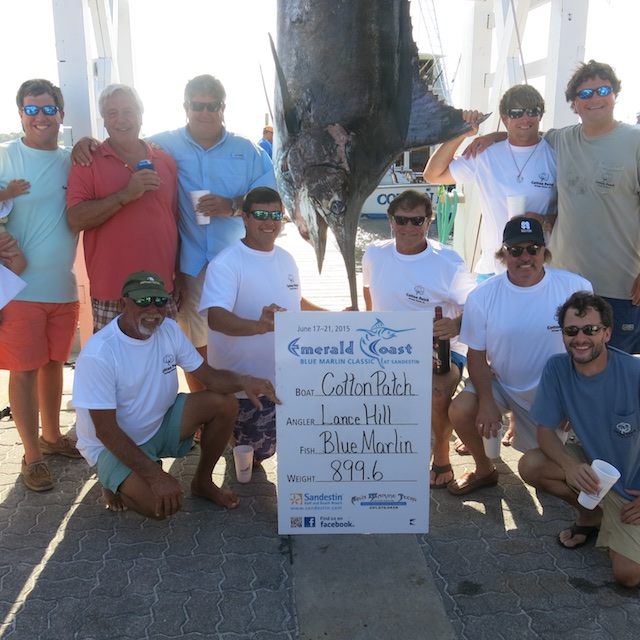 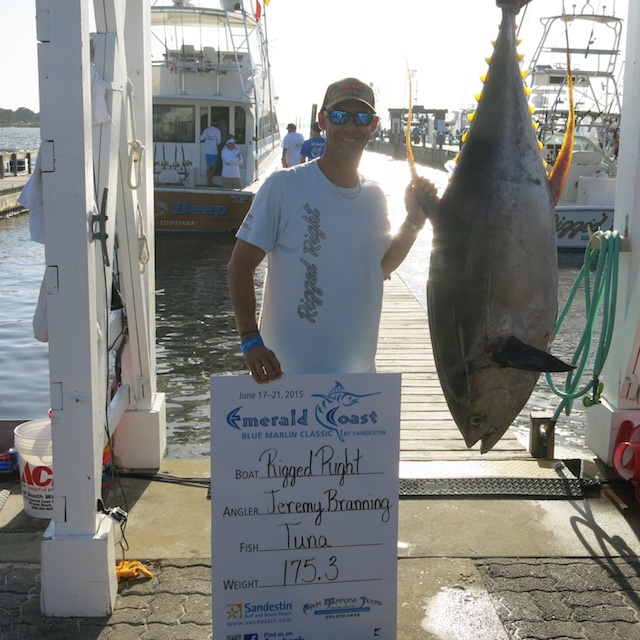 Sports are full of cliches and one of the most commonly used is “Records are meant to be broken.” But for the 2015 Emerald Coast Blue Marlin Classic, shattered is a more appropriate description. Team Cotton Patch, a 60-foot Hatteras based in Orange Beach, Alabama, smashed the old mark by 116 pounds after boating a blue marlin that tipped the scales at a benchmark 899.6 pounds late Saturday afternoon. Lance Hill was the angler on the record fish. And in strange twist of fate, Travis Dorland, who set the previous mark of 783.6 in 2012 aboard Done Deal, was the mate this time on Cotton Patch, which is owned and run by his father, Johnny Dorland.

“I’m not sad at all,” Travis explained before the weight was announced to the large crowd of spectators. “It was fun and I’m glad to have been a part of it. That fish was a mean one. Some big ones lay up, but this one, not at all.” The fish was subdued on 100-pound test line with a 300-pound leader. A 15-pound live blackfin tuna was the bait. Cotton Patch was fishing in the Mississippi Canyon near the Devil’s Tower Rig and the fight lasted five hours. The lucky spot was determined by a mutual agreement between father and son.

“We went as far as we could go in this boat,” Travis explained. “A lot of boats passed us by, but I’m glad now we stopped where we did. Getting that fish into the boat was an ordeal, though. It was an all-hands effort.”

In another unusual twist, Scott Brown, who caught the winning marlin last year aboard Reel Fuelish, was again on the rod Friday when another big one struck. This time Brown was in the chair on Click Through, a custom Wanchese convertible owned by Keith English, when he boated a blue weighing 548.0 pounds. But Laurie Jones, fishing on her husband Rocky’s boat, Reel Addiction of Pensacola Beach, Florida, made a late—and successful—charge at the leaderboard with the last marlin weighed. Jones’ fish came in at 551 pounds, which vaulted Reel Addiction into second place in the weight division.

“It took 3.5 hours to land it,” Jones recalled. “I had it coming towards us but the fish was dying, so I had to get a second wind and really work to get it to the surface. I kept thinking, ‘Please leader, Please leader’ and we finally got it in. It was an exhausting fight.” That fish, which also ate a 15-pound live tuna, was hooked near the Marco Polo Rig.

The standings changed constantly throughout the night as dozens of boats returned to the Baytowne Marina with tuna, dolphin and wahoo. Jeremy Branning was the top stick in the close tuna division. His fish, captured aboard Rigged Right, weighed in at 175.3 pounds. Seth McGonical on Jubilee was right behind at 172.3 pounds, followed by Michael Jonner (Southern Miss) at 164.6 pounds.

Scott Cooper and his team aboard CE were among the final boats to weigh late Saturday night, but the wait was worth it. Cooper’s dolphin was an even 47 pounds. Mike Hickey on Don’t Blink had the second-largest dolphin at 43.7 pounds and Paul Wagenseil on My Time came in third with a 43.6-pound gaffer.

Mike Duffessy scored the top wahoo for this year with his 61.3-pound fish on Backdown2. Neal Foster and his team aboard Intense, an outboard-powered 39 Contender, ran more than a thousand miles to find a 55.7-pounder, while Sherry Polk, competing aboard Share-E, dropped to third at 48 pounds.

The $1.58 million in tournament and optional entry money will be divided up at the Awards Brunch Sunday morning. But one thing is certain long before the checks are handed out. The 2015 ECBC is definitely one for the record books, with no cliches necessary!