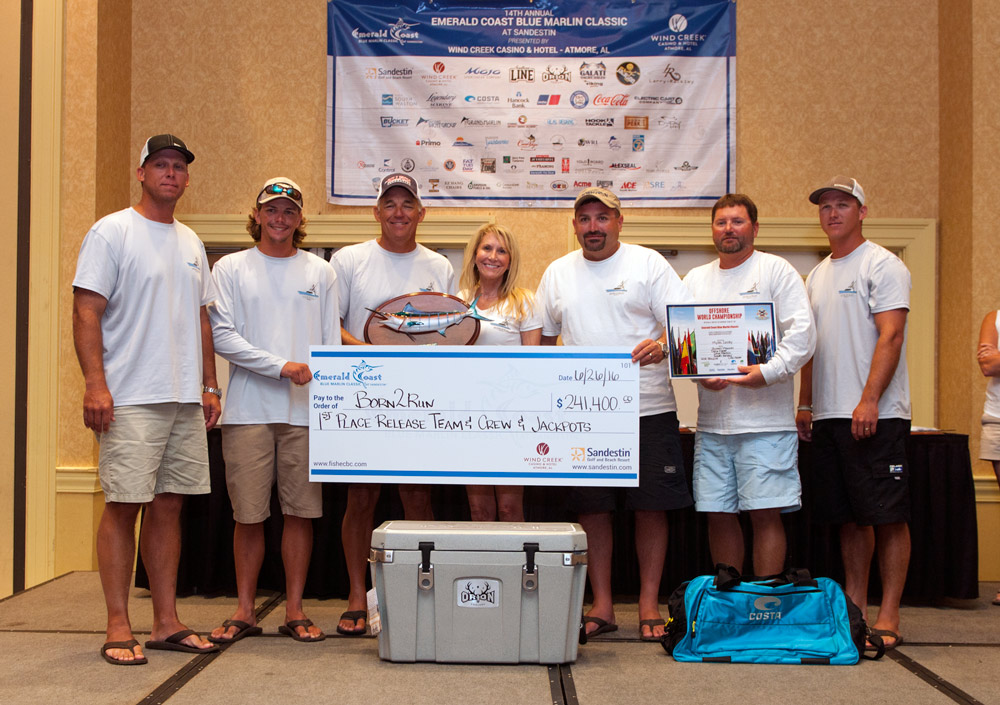 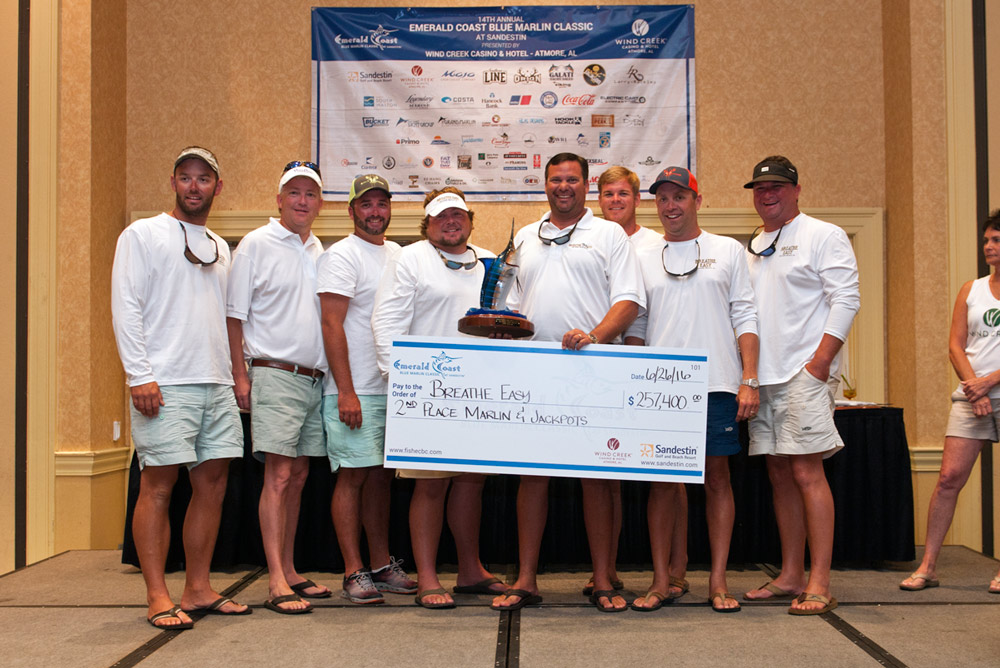 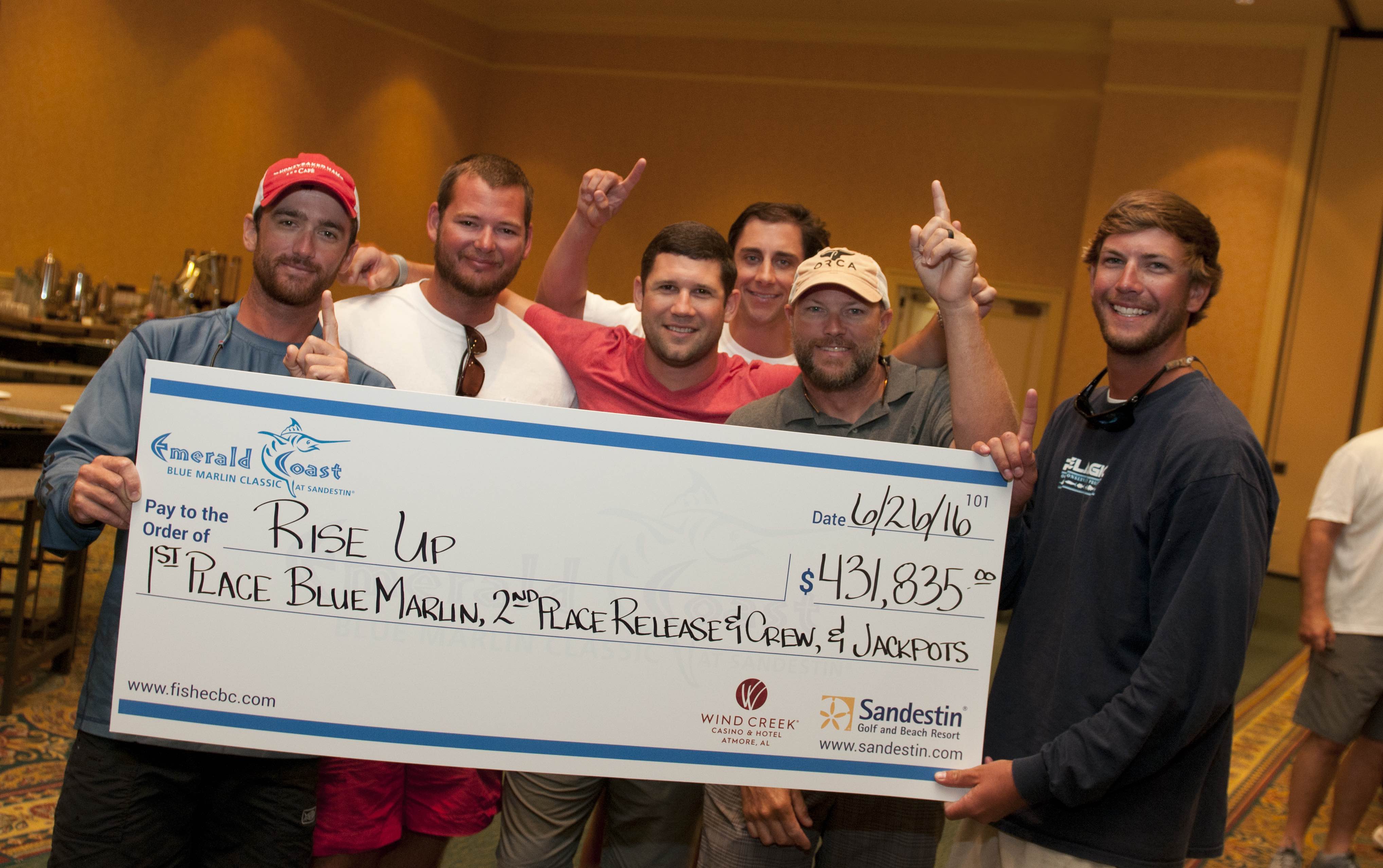 LeBron James and the Cavaliers brought an NBA Championship home to Cleveland earlier this month. This past weekend, Rise Up, a Destin-based Viking 54, made a vertical leap of its own by scaling the largest blue marlin of the 14th annual Emerald Coast Blue Marlin Classic, earning the Grand Champion title and the biggest chunk of the record $1.95 million in overall prize money. Rusty Skalla of Savannah, Georgia, is the boat’s owner.

“This was a huge win, especially for a hometown team. It’s always been a dream to win this tournament and now we’ve finally done it,” he explained. “We knew it would be close. Jason (Capt. Jason Hallmark) said it would be under five pounds and it was. So we’re off to Orange Beach next to try for the Triple Crown. It’s a long shot, but we may get lucky and have a chance at that trophy too.” Angler Scott Poppell, also from Savannah, Skalla, Mike Cournoyer and Jim Bennett, weighed a 838.2-pound blue marlin early Saturday evening to claim the top prize. Rise Up was also named the second-place release team overall after letting two blues swim away. Those catches earned the team a whopping $431,835 payout, including optional jackpot entries.

Matt McDonald, Chad Postle, Capt. Patrick Ivie and this season’s firecracker team aboard Breathe Easy confirmed the rising cost of fresh seafood. After scaling what appeared to be a sure winner Friday night, a blue weighing 835.8 pounds, the team decided against going back out only to have Rise Up edge them by 2.4 pounds. That fish was still good for second place and a consolation prize of $257,400 with optional entries. Had they held on to first, however, Breathe Easy would have won $422,000 instead, which works out to be about a $68,750 per pound.

The Kraken, a buddy team from Ocean Springs, Mississippi, took full advantage of the only opportunity presented when angler Fouad Zayed whipped a 652.2-pound blue on 30-pound line. The Kraken is a 33 Conch center console. That feat earned the team third place billfish honors and a check for $40,800.

Done Deal, a 70 Viking owned by Jon Gonsolin of Houma, Louisiana, brought the fourth and final marlin to the weigh scales Saturday night. Daughter Katie Gonsolin whipped the 409-pounder with ease and also released a blue. Done Deal pocketed $133,740 in optional entry jackpots for the weekend.

Owner Dana Foster, Capt. Myles Colley and the team aboard Born2Run, a 63 Hatteras based in Pensacola, Florida, proved how lucrative releasing marlin can be. Foster scored four blues, worth 500 points apiece, to win top release angler recognition, first-place release team and crew, plus jackpot money worth $241,400. Rise Up was second, followed by Reel Fire ($67,325). A Work of Art and Pair-A-Dice also won jackpots for releasing billfish.

Kenny Tamm, Capt. Matt Condon and the Marlin Darlin team (Viking 70), earned a spot in the ECBC record books by boating the largest yellowfin tuna ever caught in the 14-year history of the event. The 190.6-pounder was good for a $74,911 payout. One More took second place in the division with a 186.3-pound fish. That, combined with a 33.1 dolphin, earned a check totaling $153,257. Team Supreme was the third-place tuna winner with a 164.8-pound fish, good for $66,284. Caribe, Mollie and Southern Miss also won jackpot prize money for hefty yellowfins.

Chef Emeril Lagasse, Capt. Brad Benton and the team aboard Aldente are preparing a very tasty dolphin meal. Their 36.6-pound bull was the largest caught and with jackpots, was worth $125,266. Cazador, a 41 Sea Hunter, had the second-largest dolphin at 36.1 pounds, good for $42,895, followed by Pier Pressure with a 34.1-pounder. Don’t Blink and Overbite took home some of the optional dolphin prize money as well.

“I know this sounds like a broken record, but that’s exactly what we accomplished for our 14th anniversary celebration,” said Tournament Director Adam Alfonso. “Most boats ever, largest overall purse ever at nearly $2 million, plus new tuna and wahoo marks. Wow, what a fabulous week, matched by beautiful weather and outstanding fishing. We couldn’t do any of this without all our wonderful sponsors like Wind Creek Casino & Hotel-Atmore, plus dozens and dozens more. Thanks to all of them for partnering with us on this great event. I can’t wait to shatter still more records when we kick off the 15th annual ECBC June 21-25, 2017.”

Capt. Dave Lear has been covering big-game fishing for more than three decades, first as the editor of Marlin magazine and later as an award-winning freelance writer and tournament correspondent. The former executive director of The Billfish Foundation was also the 51st angler to gain membership in the IGFA’s exclusive Royal Billfish Slam Club by catching and releasing all nine species of billfish. Learn more about Dave at www