In case you hadn’t noticed, the calendar has flipped again and less than four months remain until the 2018 Emerald Coast Blue Marlin Classic gets underway. Teams are undoubtedly already making plans to compete in the richest tournament in the Gulf. Preparations are underway on the host side too, as tourney organizers lock down sponsor commitments and tweak the week-long line-up of activities. 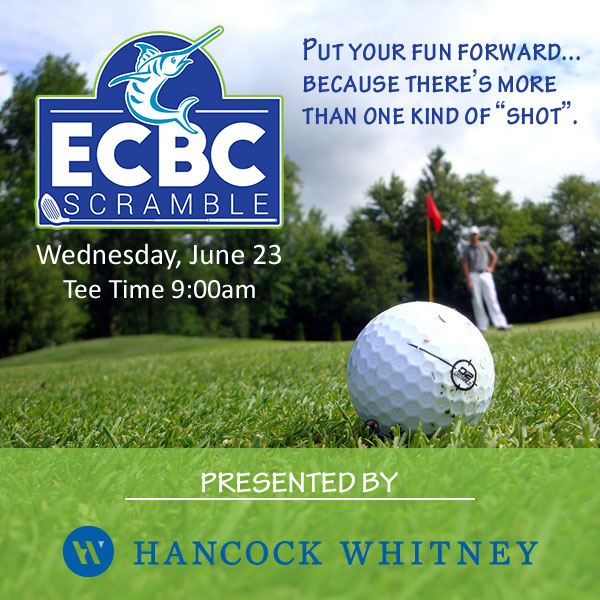 The popular Golf Scramble tees up on Tuesday, June 19. Featuring a relaxed scramble format, this fun contest will be limited to 36 teams with a maximum of four players per team. Instead of focusing on individual scores, team members hit their best shot and advance along the fairway from the best shot of the group. Play continues until one player hits the ball in the hole. Scoring is based on the total of the best shots.

The Scramble begins at 9 a.m. at the Raven Golf Course at Sandestin. Cost is $25 per player and is open to all ECBC teams and sponsors. Drink stations will be conveniently located along the course and lunch will be served afterwards. Besides trophies and bragging rights, prizes will be awarded for closest to the hole, longest drive and holes in one. Hancock Bank and Whitney Bank will also sponsor a Chip Draw. Questions? Email Alex Githens.
SIGN UP FOR THE SCRAMBLE

Wind Creek Casino & Hotel-Atmore is back again as the Presenting Sponsor for the 16th annual ECBC. Although specific details are still developing, anglers and crews can look forward to a VIP room at the kick-off party. Mock gambling tables and another bar will allow guests to play for prizes and interact with the Wind Creek staff to learn more about the resort’s many amenities. Other venues highlighting Wind Creek Casino & Hotel-Atmore are in the works as well.

ECBC participants can also look forward to an expanded menu this season during the kick-off party and awards brunch. In addition to delicious staples like roast beef, baked salmon and pasta, the Sandestin chefs are adding several options for those who are pursuing healthy diets.

“This year we’ll have lots of wholesome options for those people trying to eat better, including vegetarian and vegan,” explains Alex Githens, the ECBC sponsor liaison and tournament coordinator. “We’re not replacing the traditional fare but supplementing it with low-carb, low-calorie choices for a broader, healthier appeal.”

Githens says other sponsors are finalizing commitments and participants can expect a wide assortment of booth displays and sponsorship levels to augment the usual boat pageantry, weigh scale excitement and high-seas drama that the Emerald Coast Blue Marlin Classic has come to represent.

So don’t let time slip away. Sign your team up to enjoy some fabulous fun, games and food. And by the way, don’t forget—as an added bonus, exciting big-game action and six-figure cash prizes top the line-up. It all begins June 19 at the sun-splashed Sandestin® Golf and Beach Resort in Miramar, Florida.