Contrary to subterfuge by fellow competitors, there is not a big red X floating in the Gulf of Mexico with an 800-pound blue marlin waiting below. There aren’t any yellow marks for tuna, dolphin or wahoo, either. The water in America’s Ocean is fluid and constantly changing. But there are tools that can give clues or indicators that will tip off conditions that could lead to winning fish. And savvy tournament skippers use those tools to gain any advantage they can.

“It’s all about comfort and food,” explains Capt. Tom Hilton, president of Hilton’s Realtime Navigator, an offshore forecasting service that includes many top ECBC boats among its clientele, including Born2Run, Breathe Easy, Cotton Patch, It Just Takes Time and Relentless Pursuit. Subscribers use the service to get detailed charts showing aquatic features like sea surface temperature readings, altimetry, chlorophyll concentrations and loop currents. The charts can be used to show where the fish are most comfortable, temperature-wise, and where their food is most likely to congregate. The track rate of previous winners is testimony to its effectiveness.

“To compare apples to apples, I pulled up the late April charts from 2020 and compared them to now,” Hilton says. “What I’m seeing is very similar conditions. There are warm plumes of water coming up off the Loop Current and feeding into the popular fishing areas. The introduction of the FADs (fish-aggregating devices) off Destin will definitely be a different component this season. Boats working those areas won’t have to run nearly as far as to the rigs. Sea surface temperatures are critical. Look for warmer water early, then later in the summer, cooler is better for the right comfort zone. The best bet for finding blue marlin is water in the upper 70s to low 80s. That’s why pinpointing specific temperature zones is important.”

Hilton says there are two pronounced plumes veering east and west. The eastern one is bringing water around 72.5 degrees to the deployed FADs, a mark that would typically attract white marlin and wahoo. The warmer, western plume, which pushes towards popular targets like the Who Dat rig, Ram Powell, Gulf Stars 1 and the drill ships is 77 degrees and higher. The Blind Faith rig has been particularly active so far this season.

“Right now there is cobalt blue water all the way to the USS Oriskany artificial reef, about 18 miles from the farewell buoy off Pensacola Pass. Last year there was green water way inshore and boats had to run at least 50 miles to find the desired color. That’s the biggest difference so far between the two seasons. For 2021 everything is looking good. Boats are already catching billfish and as the water warms, more fish will be caught.”

Hilton has spent considerable time and money upgrading his software to make it more user-friendly and compatible with the myriad of devices used to display the imagery. He now uses eight to nine satellites to track sea surface temperatures and has switched to a European satellite for more accurate altimetry readings.

“I’m about to turn on the switch to launch the new site,” he says. “The new format has a lot of improvements that I think the guys are really going to like. They’ll be able to de-select the waypoint names, for example, to eliminate some clutter on the screen. We also track the pipe-laying operations and dive boats around specific rigs. It’s important to know the restrictions around some, because that can impact the ability to put lines in the water.”

Hilton’s Realtime Navigator is offering a 10 percent discount to customers who renew their subscriptions this season as a way of thanking them for their loyalty. To check out the site or to renew, please visit realtime-navigator.com 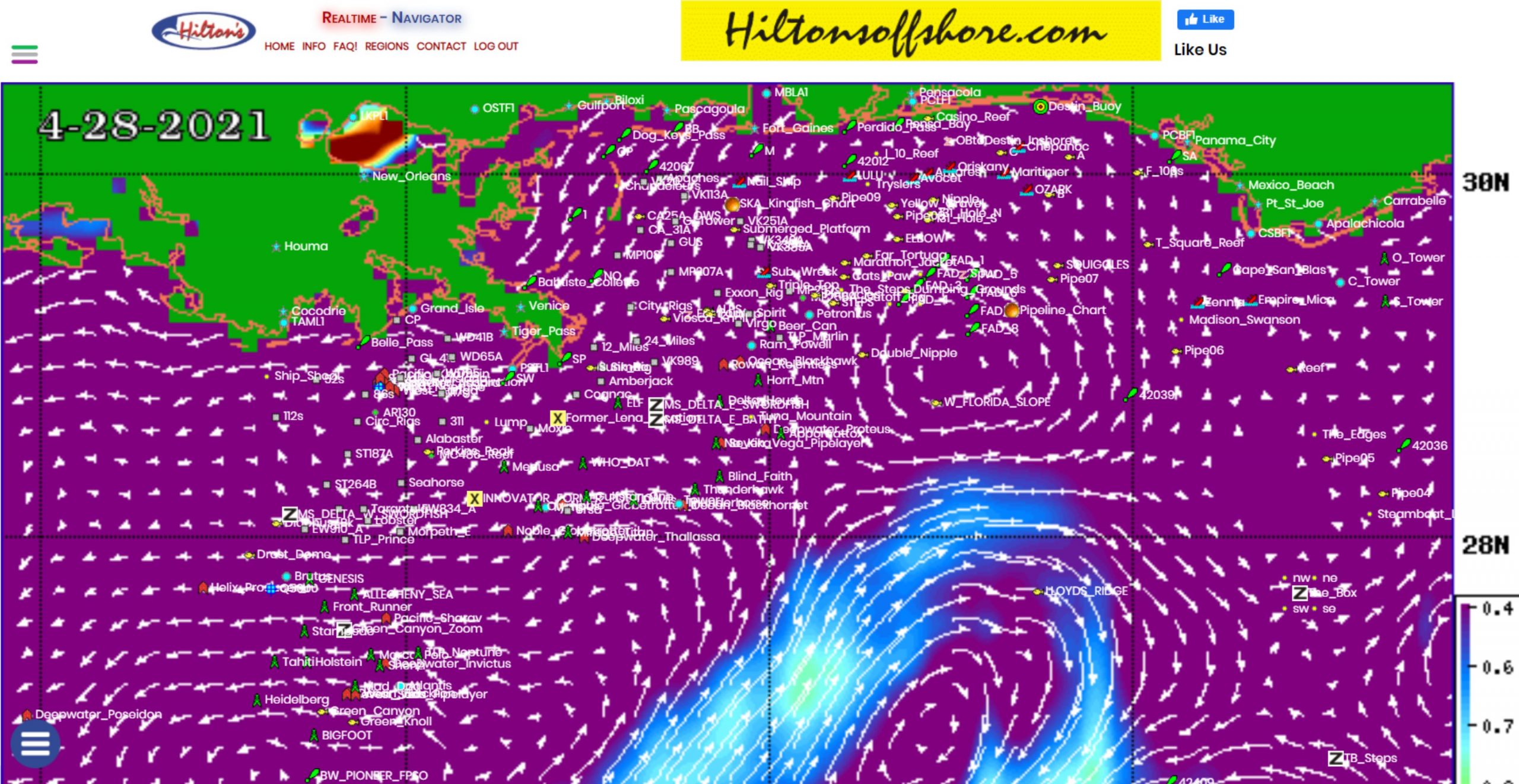 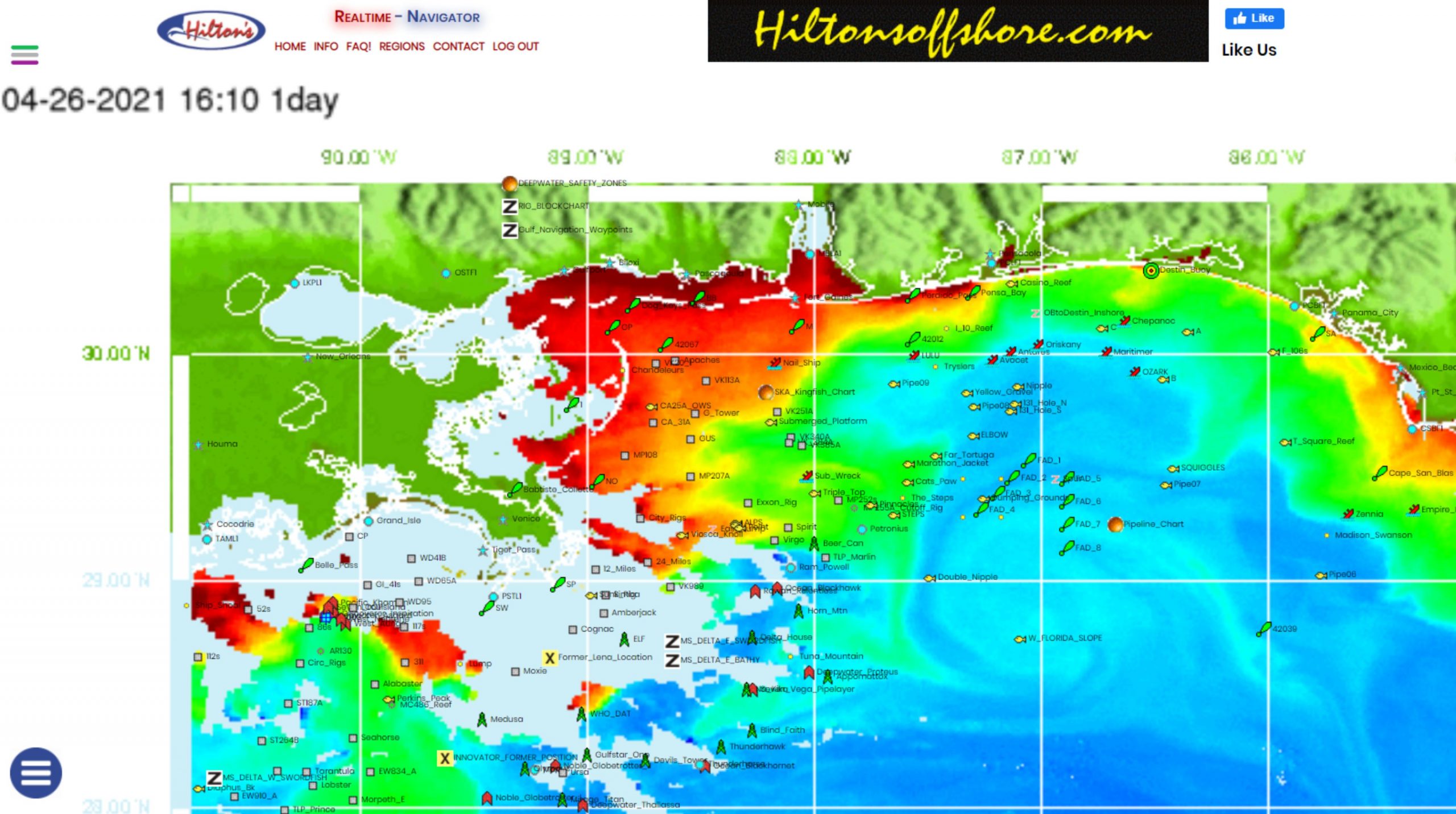 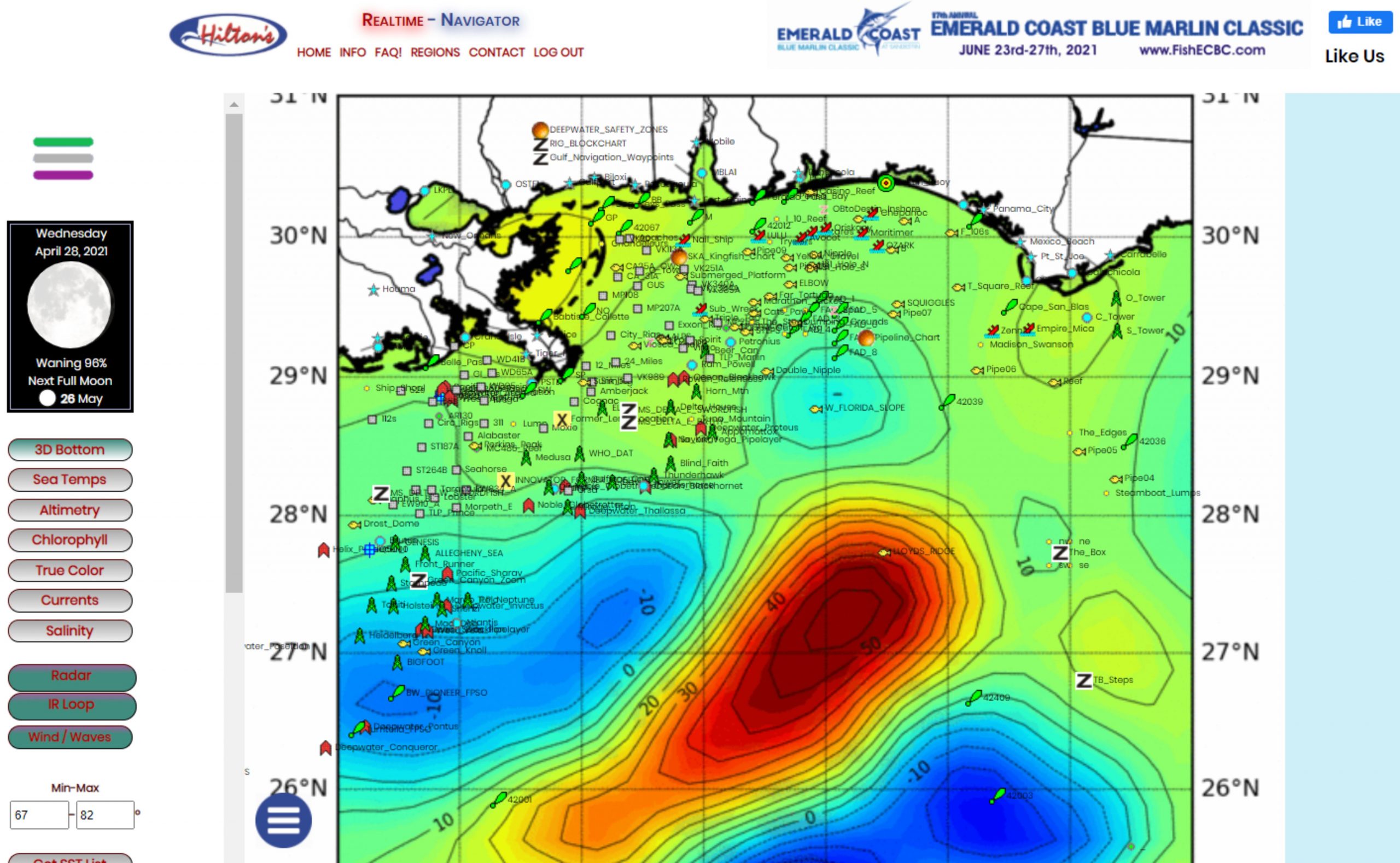 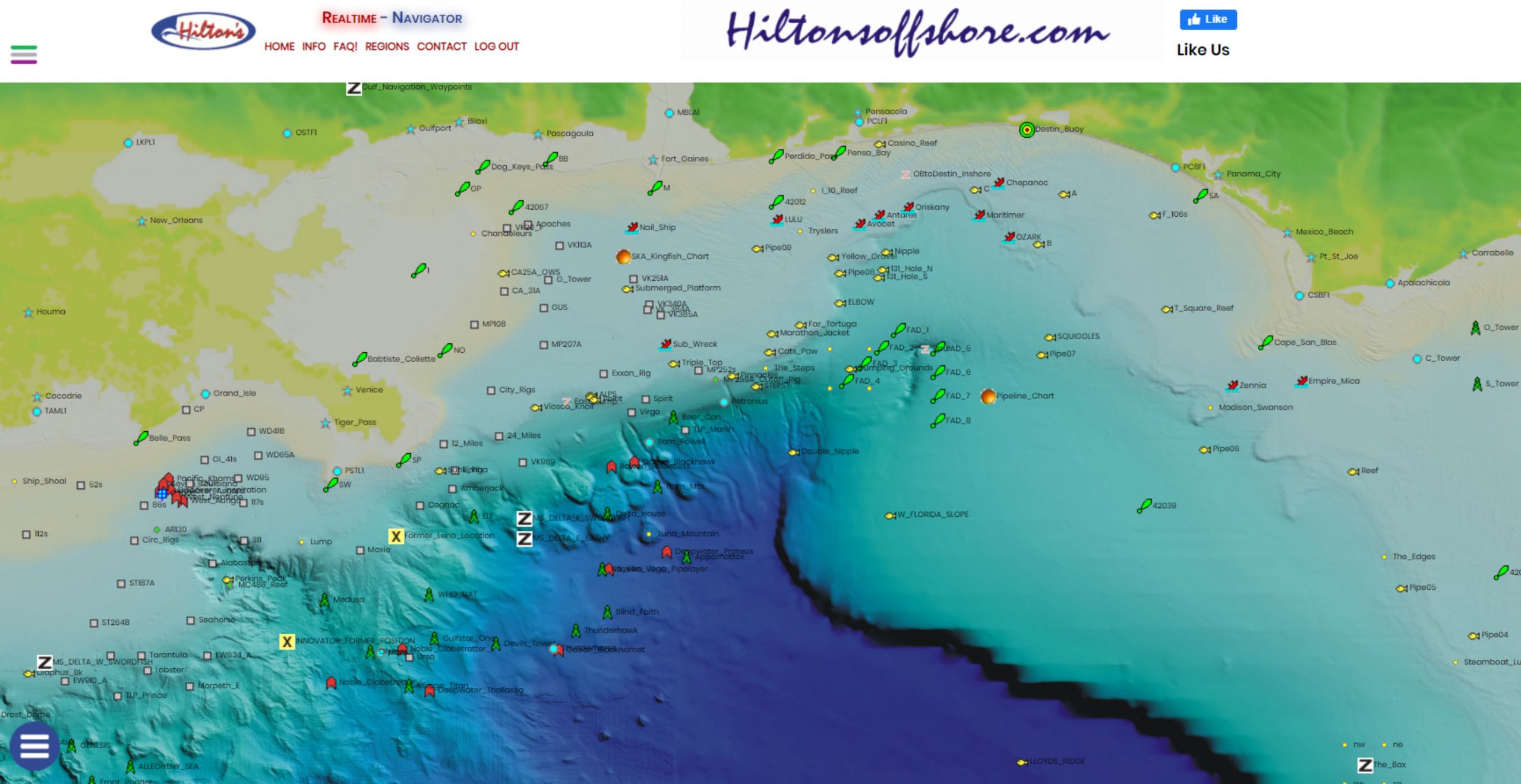