In a grim reminder of the power of nature, residents of coastal Louisiana are cautiously emerging from shelter and assessing the damage Monday, August 30. A deadly and powerful Hurricane Ida came ashore just before noon Sunday at Port Fourchon and is still wreaking havoc inland. The Category 4 storm, with sustained winds of 150 miles per hour, is among the top five strongest to ever make landfall in the United States.

As those in the storm’s path start the long recovery process, boaters elsewhere along the Gulf Coast keep a wary eye on the Atlantic with more than three months of official hurricane season still remaining. Even though forecasters can usually give several days notice of an impending landfall, it is always prudent to have contingency plans ready for protecting boats.

Capt. Dick Flanery has been with Sandestin’s Baytowne Marina for 20 years. Dealing with potential storms is a big part of the dockmaster’s responsibilities.

“All boat owners in the marina must file a hurricane plan with us,” he explains. “If a storm is three or four days out with expected strong winds and surge, we can order an evacuation. If owners elect to stay, they are responsible for any damage their boats cause to the marina or other boats.”

Flanery, with Jason Draughn and the assistant dockmaster, make the evacuation call if necessary depending on the path of the storm and its strength, based on multiple forecasting sources. In preparation, the marina staff removes all loose objects on the docks like garbage cans and golf carts. The marina office must also be prepped for possible flooding.

“We always err on the side of caution,” Flanery adds. “We take into account the cost of moving boats, but my primary concern is protecting the docks. We try to make the best decision we can, and that’s the tricky part depending on the path. With a straight approach, boaters aren’t sure which way to go. One owner sent me a one-page plan one time with only the initials, RLH. I asked him what he meant and the reply was, ‘Run Like Hell.’”

Capt. Jeff Shoults, a Destin native and long-time ECBC contestant, operates Mollie, a 66 G&S that slips in Destin Harbor. Shoults recalls bad hurricanes in the past, including one when a direct hit shoved charter boats into the woods, where barges had to pull them out. After Hurricane Opal 26 years ago, his dad lived on a boat for two weeks waiting for power to be restored.

“My storm prep now is not the same as years past,” Shoults explains. “With the old Mollie we installed extra tall pilings at my friend’s house back in the bayou and took it there. I’d back into the slip and put anchors off the bow, port and starboard sides and also tie off to a big pine tree. Ropes are cheap and you have to allow for the surge and prepare for the boat to go up and back down.”

Joe’s Bayou and the Intracoastal Waterway between Destin and Panama City are prime “hurricane holes” for sheltered anchorage, Shoults says. High bluffs along the ICW offer protection from wind sheer and plenty of trees for rope anchors.

“I prepare for a storm differently now,” Shoults adds. “I fuel the boat, add provisions and figure out the storm’s direction and go. The boats are faster, so with five-hours notice I can be 150 miles away. Plus Destin is an island. If it takes a direct hit and is inaccessible afterwards, I can make water, ice and stay aboard. So I plan to take the boat with me from now on.”

Local offshore enthusiast John Dunphy lives on a sheltered bayou in the Destin area. He keeps his 370Z SeaVee on a lift, along with his ActionCraft flats boat. The insurance policy on the SeaVee requires a haul-out if winds are expected to reach a certain level. He has a $2,500 annual contract with Emerald Coast Marina as a result. The facility charges $400 per haul-out; that cost is split with the boat insurance company.

“My insurance company had to approve the haul-out facility, which must be a Category 5 building,” Dunphy says. “This year has been much easier dealing with haul-outs, and that lessens the stress if you also have to evacuate your home. The marina puts the boat on a rack inside the building and it is secure. But I do suggest minimizing the boat weight as much as possible beforehand to make it easier on them.”

If he doesn’t have to haul the big boat, Dunphy raises the lift as high as possible to account for storm surge. Covers are removed to minimize wind resistance and he turns off power to the dock to avoid problems. The flats boat is also secured to the pilings with extra ropes.

With an already active 2021 hurricane season, everyone is hoping the Gulf Coast will be spared any more storms. But with advance planning and preparation, boaters can be ready if another one does take aim at the Emerald Coast. 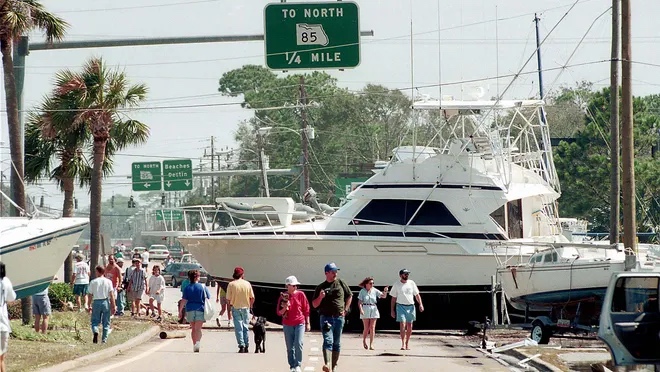