If you’re new to the tournament you may have some questions about our format — what we fish for, the different entry levels and awards, and how to enter the tournament. This page should answer most of those questions. But if you’d like more information, just call Julia at 910.264.3947 or email julia@tournamentcontrol.com.

Entries received by May 31 are eligible for the Early Bird drawing and a chance to win $1,000 plus free dockage at Baytowne Marina during the tournament. The earlier you enter the more chips you get. Entry date is based on the date we receive your deposit.
REGISTER FOR THE TOURNAMENT

The Emerald Coast Blue Marlin Classic is a “modified release” tournament; blue marlin are the only billfish that may be weighed and must meet a 110″ minimum length before they can be boated. Release points are awarded for blue marlin, white marlin, sailfish and spearfish. The three heaviest weighed blue marlin, dolphin, tuna and wahoo are eligible for cash awards, as are the top three teams entered in the Release Division, and the top three Crews entered in the Crew Division. Awards are presented to the top overall, release, lady and junior anglers, and the top overall release team has its name engraved on the Magnificent Blue Perpetual Trophy, donated by Galati Yacht Sales and Viking Yachts, sculpted by Chris Barela and on permanent display in the Baytowne Marina Bar & Grill.

You can enter the tournament any time before the end of Registration on Wednesday; the base entry fee must be paid in full by the end of Registration. Optional entry levels and jackpots can be entered at any time up until the start of tournament fishing. The base entry fee must be paid to secure a slip at Baytowne Marina. There is a $500 late fee for teams signing up on the day of registration.

• Download a print version of the entry form at fishecbc.com/pdf/ecbc-entry-form.pdf and email completed form to julia@tournamentcontrol.com or mail to ECBC, PO Box 6128, Miramar Beach, FL 32550. Do not mail entries after June 12th.

• Bring completed forms with you to Registration.

• Enter and pay optional entries and jackpots online at fishecbc.com/jackpots/.

• Download a print version of the jackpot form at fishecbc.com/pdf/ecbc-jackpots.pdf and bring it with you to either Registration on Wednesday or Jackpot Entry on Thursday morning.

Registration is 4:00–8:00pm on Wednesday, June 22 at Hotel Effie, Sandestin Golf and Beach Resort. Teams must check in during Registration to verify team information and collect team bags. Additional wristbands and merchandise may be purchased at the event. Each team is given an envelope at Registration which includes a billfish scorecard, tail tags, rules and other forms.

CHECK—PREFERRED Checks (business, personal, cashiers) are accepted for both Entry Fees and Jackpots. Make checks payable to Sandestin Investments, LLC and mail to ECBC, PO Box 6128, Miramar Beach, FL 32550. Please do not mail checks after June 10th; bring with you to Registration instead.

CASH—Cash (USD) is accepted onsite during Registration and Jackpot Entry.

The release division includes blue marlin, white marlin, sailfish and spearfish. Awards are given to the top three teams accumulating the most release points. Billfish releases must be video verified.

The crew division includes the team’s overall catch—both weighed fish and billfish releases. Awards are given to the top three crews accumulating the most total weight (all species) plus release points.

Jackpots (optional)
You can enter any combination of jackpots (for example: B1, B2, B3, D2, W3). Jackpot winners are based on the top three heaviest fish, or most release points, in that jackpot category.

Decisions pertaining to the distribution of a team’s total purse are the sole responsibility of the team members, regardless of whether an award is published as an individual or team award. The tournament organizers do not participate in decisions regarding cash distribution. We suggest you discuss how any prize money won is to be distributed before the tournament.

Form W-9—Any person or company receiving a check must submit a W-9 before funds can be disbursed.

Cash Disbursement and Tax Documents—Cash awards are paid by check and mailed within two weeks following the receipt of the completed Disbursement Order and W-9(s). A 1099-MISC is issued for all prize money to the person or company to whom the check is made payable.

Top Overall Release Team (Perpetual Trophy)—Sponsored by Galati Yacht Sales and Viking Yachts
Awarded to the team that accumulates the most release points and is also entered in the Release Division. The winning team’s name is inscribed on the Magnificent Blue Perpetual Trophy sculpted by Chris Barela, which is on permanent display in the Baytowne Marina Bar & Grill.

Top Release Angler—Sponsored by Costa Del Mar
Awarded to the angler who accumulates the most release points.

Top Lady Angler—Sponsored by MarineMax and Grady-White Boats
Based on overall catch—both weighed fish and billfish releases and awarded to the lady angler accumulating the most total weight plus release points.

Top Junior Angler/Billfish—Sponsored by The Billfish Foundation
Awarded to the junior angler (15 years or younger) who accumulates the most total release points.

Top Junior Angler/Gamefish—Sponsored by Florida Detroit Diesel-Allison and MTU
Awarded to the junior angler who accumulates the most total weight points (all species).

The ECBC is a qualifying event in the Gulf Coast Triple Crown Championship (gulfcoasttriplecrown.com), InTheBite’s Captain of the Year Cup (inthebite.com/captain-of-the-year-cup) and the Sport Fishing Championship (sportfishingchampionship.com). Points and/or placement awarded in the ECBC count in these tournament series. The ECBC sends team contact, points and placement information to each Series’ coordinator. Any prizes or awards are the responsibility of the Series’ and not the ECBC. Refer to the Series’ websites for current rules and standings. 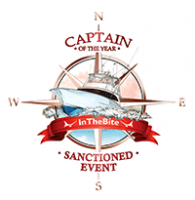